There once was a website called Katharsis which presented stunning images of men in peril (as shown on this page) that were created by a variety of artists. The word (spelled with the letter “k”) comes from Greek, κάθαρσις. The definition is “purification” or “cleansing” or “clarification” in the specific context of a healthy release by setting free one’s emotional or psychological and physical tensions.

The undeniable reason for Katharsis was to show uncensored material that depicted ancient Roman gladiators, Greek soldiers, human slavery, torture and castration, dismemberment, hangings, beheadings, prisoners of war, executions, revenge or thrill killings, and other extreme and highly controversial behaviors of men. The material never was about loving relationships between men.

The intended audience can best be identified as college-educated adult males—professionals in the fields of the military, religion, medicine, law, education, and business. Katharsis was created to provide guilt-free therapeutic release for men brought on by viewing of fantasy-oriented fiction and images online. The unifying theme is an unbridled and joyful celebration of men in peril. 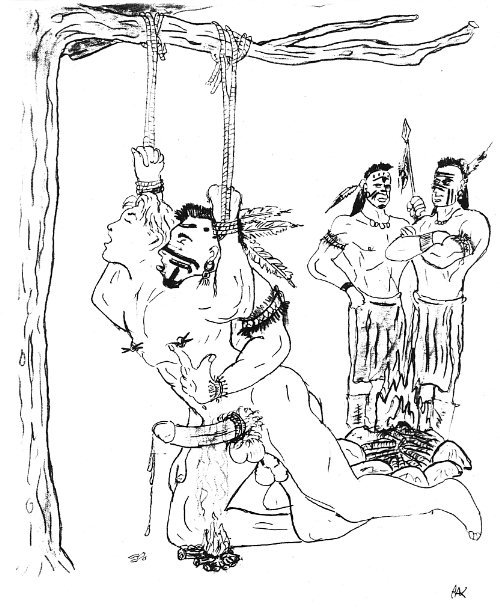 If you have any comments or anecdotes pertaining to Katharsis, please post what you’ve got in the comments section at the bottom of this page.

The Man Who Created Katharsis

In the late 1980s John Randall—not his real name—created Katharsis as a primitive (amateurish looking) collection of black-and-white printed-out and photocopied stories and images sent on paper to subscribers through the mails.

You can download a 1989 issue of the Katharsis Project Newsletter: 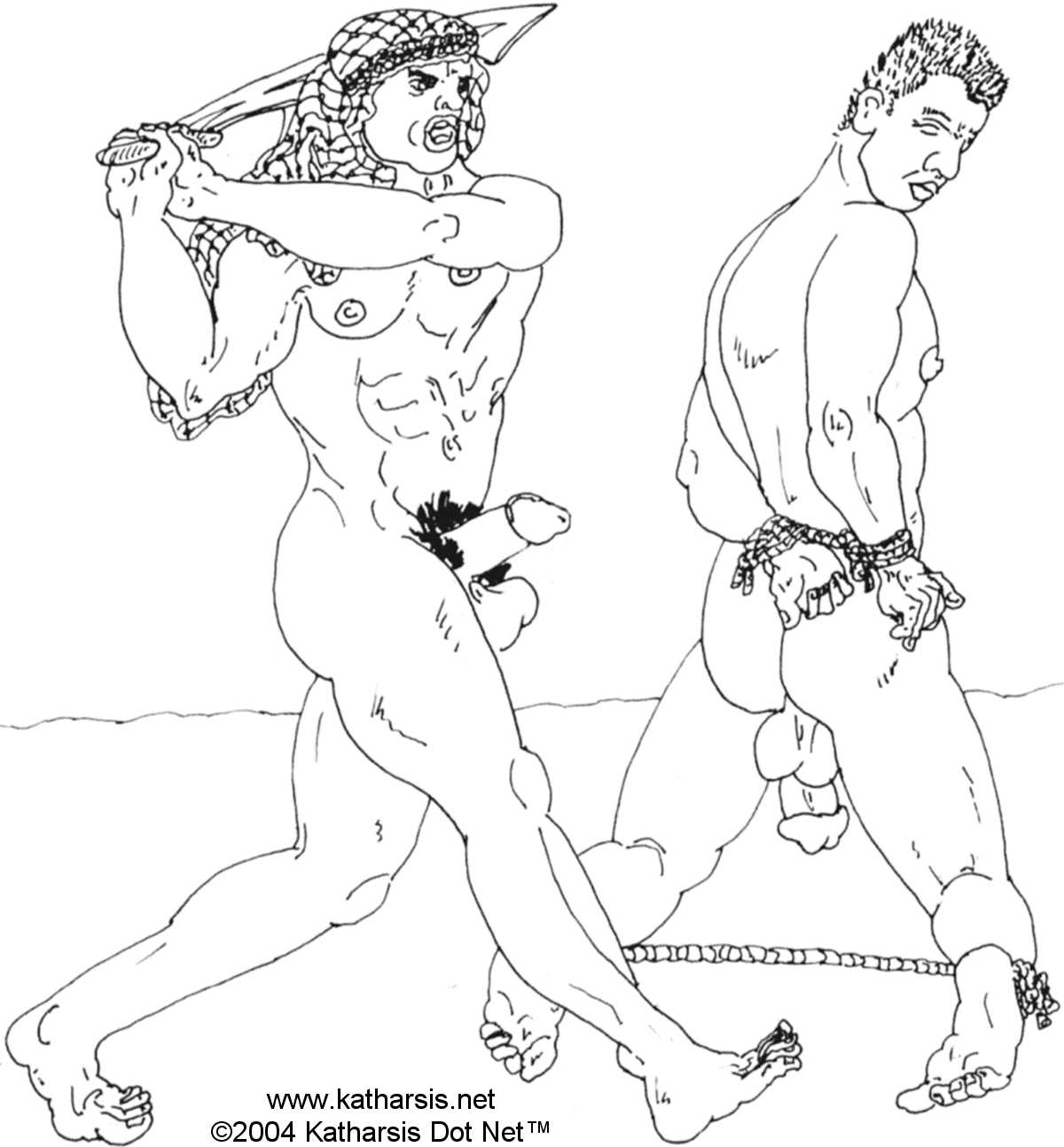 Katharsis Illustrated Story -- The Hell It Is! -- Martin of Holland

Just before Christmas 2008, I was in contact by email with the man who called himself John Randall. That was his pen name. I never learned his true identity of this man who cloaked himself in mystery. It is possible this man’s legal name was Randall Johnson.

The emails that I received from this mysterious man stand out as the single most unforgettable holiday season communication I have ever received spanning many decades of adult life. Instead of sending the usual cheerful and uplifting sentiments for the festive season, this odd man confided to me in his email that he was going to commit suicide.

He seemed to me to be a very bizarre person. Why would I believe anything that he told me in his emails?

If a writer had created John Randall as a fictional character, they would have given him a home in an isolated area far away from most people.

They would have written about his life living in a trailer in a remote Mojave Desert town called Pahrump, Nevada. Even the name of that town sounds fabricated, doesn’t it?

Of course, Google Maps can validate that there truly is location in the state of Nevada called Pahrump. Wikipedia can provide additional details about this odd-sounding town, including one famous resident—a third co-founder of Apple Computers (Ronald Gerald Wayne). Wayne is known to have dropped off the grid while two other guys behind Apple Computers went on to become extraordinarily rich and famous.

John Randall told me Ronald Gerald Wayne was his roommate in a trailer in Pahrump, Nevada. I never could verify whether this was true or false, but at one point in time, the name R. Gerald Wayne was listed on the Katharsis website.

When I dug a little deeper to learn more about Pahrump, Nevada I was able to discover a tantalizing tale about a large amount of silver buried in Pahrump, Nevada by the legendary Las Vegas casino owner, Ted Binion, who died mysteriously in 1998. There is a twisted story behind the buried treasure and Binion’s death unrelated to John Randall or Katharsis.

At first I was merely someone who paid for John Randall’s primitive printed product that was mailed to me. I eventually convinced John Randall to post some of my digital illustrations on the Katharsis website.

He came to trust me. He started sending me emails which revealed aspects of his personal life—stuff I never wanted to know about. During 2003, I received several digital photographs in email from John Randall purporting to show a Plexiglas window of the Pahrump trailer in which a mysterious object had become embedded. He wrote with certain conviction in emails sent to me about his fear that the embedded object (yes, it was silvery in color and had a slender, futuristic look) might just be of extraterrestrial origin or from the future.

If this had been a science fiction story or an episode of The X Files, perhaps the true identity of the co-founder of Apple Computers was at the core of John Randall’s misfortunes. Perhaps the co-founder of Apple Computers was actually from the future or from another world. How could any mere mortal from this small blue planet ever have helped invent something as brilliantly advanced and addictive as the Apple Computer!? Perhaps that silvery object embedded in the Plexiglas was, indeed, a communications device that enabled communication with an extraterrestrial civilization.

John Randall admitted that he had been abruptly kicked out of that Pahrump, Nevada trailer by his roommate following the arrival of that futuristic technology stuck in the trailer window. After John Randall relocated from Nevada to Florida, he wrote this to me: “…my eyesight has returned but other problems have conspired to make today possibly the day … if you do not hear from me by Christmas, assume I have died…” That was that last I ever heard from him.

In his final email to me from 2008, John Randall wrote this: “…my situation is this, I have not been able to find a place to stay, Florida is dragging its feet getting me food stamps and Medicaid … I’m staying with my uncle but he wants me out ASAP, no later than Christmas day… he wants me out today … since I have no place to go, and I’m deaf and intermittently blind, I would be beaten up and starve on the street, so I choose to take an overdose of my diabetes medicine … that will put me into a non-recoverable coma …” John Randall gave me complete and unrestricted control over the content and distribution of Katharsis before he brought death upon himself deliberately. I could never find evidence he paid for or filed legally-binding documents to protect either the copyright or trademark so this all remains in the public domain.

John Randall provided me with an FTP log-in that enabled me to access a server in the state of Nevada that he claimed had been the web host for the original Kartharsis site. There I found archives containing Katharsis material dating back in time to 2008. I felt the responsibility to preserve and distribute what John Randall had set in motion so many years ago.

The European underground artist Martin of Holland had emailed me during 2008 with a warning: Martin explained that John Randall was a former Roman Catholic priest, and, for that and other reasons was not someone to be trusted.

Also during this same period of time, I had seen comments from others posted within Google Groups about their experience of having been burned by John Randall usually connected to an artist or writer being ripped off. Apparently, in his pursuit to publish extreme content about castration, impalement, secret military executions, and other brutalities, John Randall felt he could do whatever he wanted with other people’s intellectual property without providing any credit to them. One writer who used the pseudonym Moses Philstein told me that John Randall demonstrated a lack of necessary skills to pay attention to the intellectual property of others. I did not experience this personally.

While John Randall posted some of my original illustrations on the old Katharsis site, he never tried to claim that my work was his.

I produced and operated a reimagined second-coming of Katharsis starting in January 2015. The total number of visitors from 2015 to 2016 was disappointingly low. The reimagined site which was named Katharsis.xxx could not be sustained as a business due to the very low audience participation which meant this site was only a financial drain on me that provided no financial return on investment. After one full year of operation, it is unfortunate that I had no choice but to shut down that site.

While the reborn Katharsis site lasted, I maintained a focus upon the original target audience: College-educated adult males—professionals around the world in the fields of the military, religion, medicine, law, education, and business. 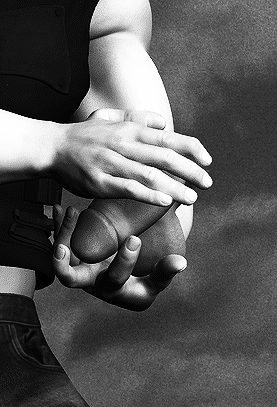 The unifying theme was an unbridled and joyful celebration of men in peril.

The value of the original and relaunched Katharsis sites were that they provide the target audience with guilt-free therapeutic release of emotional or psychological and physical tensions through viewing of fantasy-oriented fiction and images online. How I depict highly masculine men online today directly descends from the storytelling and imagery that I observed on the original Katharsis site during the 1990s. I’m convinced that the low audience numbers in the second decade of the 21st century proved that there is no longer a need for the Katharsis site nowadays. My creative works in the present day certainly have surpassed what was once considered distasteful and offensive on Katharsis during the 20th century.

If you are a monthly subscriber to the Desouza Vault you can download memories of the relaunched Katharsis site at no additional charge.

Also, you may be pleased to learn that I have preserved representatives images that appeared in the print version and the original website version of Katharsis to give you an accurate view of Katharsis images from the past: