Here you have the opportunity to discover and explore images and stories in themes of all male peril or guys in distress within the bara underground art genre. Desouza is known around the world as a gay male artist creating visually compelling works since 2007 for adults only depicting fictional male characters in fantasy situations using 3D digital image creation tools such as DAZ Studio.

The Most Requested Desouza Titles:

A Very Big Man (30 PDF pages) — Artificial lifeform is constructed in a notorious top-secret Las Vegas laboratory called Studio 9999. He is designed to bring pleasure to men. Follow his first adventures experiencing life at the hands of a sadistic artist–an older man who excels at tormenting and humiliating him. Generously illustrated with many images that leave no doubt about what is meant by the phrase “a very big man.” Very hot and sexually explicit.

Against His Will (7 PDF pages) — Sexually explicit 3D digital art by Desouza of Vegas. This is an illustrated story of a sexy, big black man from Canada. He will never forget his first visit to NYC. He is captured and forced against his will to be dominated. You will delight in seeing him tormented. But there is a surprise ending you won’t expect!

Ancient Jinn – Creatures with Wings (17 PDF pages) — Extremely graphic 3D digital art by Desouza of Vegas exploring the myths from Arabic culture of the ancient jinn (creatures with wings) who torment mortal men of Earth. Completely abandon yourself in these uncensored, sexually-explicit images of surrendering to powerful magic you cannot resist.

Ballbusting Adventures (30 PDF pages) — This is the first in a continuing series of original and uncensored CBT images with the ballbusting theme created by artist and storyteller Madeira Desouza of Las Vegas. A stunning and controversial collection of aggressive man-on-man fantasy pictures all together in one place like you’ve never seen before!

Beast (33 PDF pages) — What happened when artist/storyteller Madeira Desouza confined himself to quarters–trapped and unable to escape–in 2020 during the initial fight against the infectious coronavirus? He immersed himself in creating an original illustrated bara horror story called “Beast.” Two oversexed young men confined against their will on a private nude beach are tormented by a gigantic, angry and violent creature.

Box Set Images Volume One (10 PDF pages) — This collection features uncensored images of a fine young Mediterranean man. You can bring him home for a night or two or three of four. What pleasures would you discover with him?

Cowboys Crossing (21 PDF pages) — “Cowboys Crossing” answers the puzzling question: Why did the cowboys cross the road? Is this a trick question!? Uncensored, controversial images of naked and vulnerable cowboys to thrill and delight you.

Cowboys Dead or Alive (22 PDF pages) — “Cowboys Dead or Alive” is the second illustrated eBook in our cowboy series. You will enjoy seeing two ways (living versus dead) to remember unforgettably masculine and vulnerable cowboys. Uncensored and not for the innocent. Controversial images.

Cross (20 PDF pages) — 3D digital art by Desouza of Vegas exploring one infamous and ancient method of execution. Controversial images show our present day and depict fantasies about torture than certainly do not actually exist in the real world.

Dance Like There’s No Tomorrow now known by a new title as Hang Him Part 6 – Extended Remix (17 PDF pages) — A revenge motive leads to a hot, muscular construction worker being abducted. He is forced to dance at the end of a rope bulging from his tight blue jeans for the pleasure of a masochistic male audience. Sexually explicit, uncensored illustrated story with nothing held back.

The Death Game Season One (31 PDF pages) — Extremely graphic illustrated storybook from the first season of “The Death Game” reality TV series: Young men fight each other until one is dead. This controversial 30-page fantasy falls within the male death fetish genre and is packed with unexpected thrills.

The Death Game Season Two (30 PDF pages) — Extremely graphic illustrated storybook. This is the sequel to “The Death Game” reality TV series: Young men fight each other until one is dead. This controversial fantasy falls within the male death fetish genre and is unrelenting in its horror and excitement to satisfy you.

Hang Him Part 2 (20 PDF pages) — You know you cannot get enough of this. So, here are more stunning images for you. Extremely graphic 3D digital art by Desouza of Vegas depicting men’s hangings. This is the sequel to “Hang Him.”

Hang Him Part 3 (30 PDF pages) — Go into overload by looking at even more stunning and controversial images for you. Extremely graphic 3D digital art by Desouza of Vegas depicting men’s hangings. This is the third in a continuing series of “Hang Him” illustrated storybooks.

Hang Him Part 4 (30 PDF pages) — This extended illustrated storybook is the fourth in our series exploring the theme of ending men’s lives using ropes around their necks. If you already have parts 1 through 3 of this series, you will definitely want to get part 4 today.

Hang Him Part 5 (15 PDF pages) — The fifth in the sizzling illustrated series depicting men’s hangings. Get part 5 especially if you already have parts 1 through 4 of this series. If you have an erection lasting more than four hours, you need to seek emergency care.

Hercules 2022 (16 PDF pages) — If we believe the legends, Hercules was extraordinarily strong compared to all other men. Legend has it that Hercules could pick up a man in front of him and then lift the man into the air. Then what did he do next? Fuck them? Many sculptures, statues, and paintings have shown this unusual prowess. Artist Madeira Desouza of Las Vegas has provided an updated perspective on a classic painting from the 16th century. In the present day he can show in explicit detail what would never have been shown in art from five hundred years ago. You will want to add this to your collection of downloads of pleasure.

Kaipo, Pacific Islander — Box Set Images (10 PDF pages) — Kaipo is the name of a Hawaiian character who represents the highest standards of masculinity. The word means “sweetheart” but don’t you dare use that English word in front of him unless you want Kaipo to smash you hard in the nuts! Getting smashed in the nuts may just be what you need the most today.

Karma and the Rookie Cop (16 PDF pages) — A Desouza fan favorite! See what goes on behind the headlines when a rookie cop gets caught up with a violent street gang. Explore the intense, explicit images of a good-looking, masculine man restrained in strong peril and painful suffering on the way to his destiny.

Live Bait Cowboy (17 PDF pages) — Explicit 3D digital art from Desouza of Vegas. “Live Bait Cowboys” is the third illustrated storybook in the cowboy series. This is a horror story about a cowboy curse from the 1850s. Uncensored and not for the innocent. Why do good-looking cowboys with big cocks get treated so violently?

Playing Around — Box Set Images (10 PDF pages) — What happens when an artist inserts himself into his art works? Madeira Desouza takes you on a tour of images in which he gets involved quite closely with male characters he creates.

Soldiers Playing Soldiers (8 PDF pages) — An illustrated story of what may possibly go dangerously wrong when soldiers play around, risking their lives in deadly games merely for their own amusement.

A taboo tale of fiction, “Thief of Eggs” follows the misadventures of a young man in Berlin who discovers a forbidden method for increasing his masculinity and muscles (cutting off and then eating men’s balls.) From a story idea created by Sebastian of Germany which was produced for this illustrated storybook by Madeira Desouza of Las Vegas. Listen for free to the podcast, a narrated story version of “Thief of Eggs.” An explicit and uncensored fantasy. 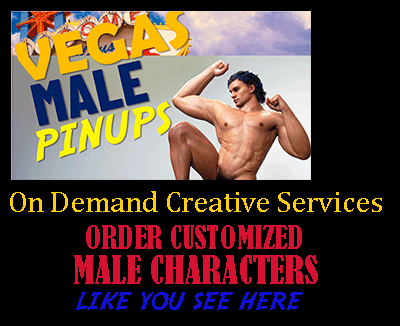