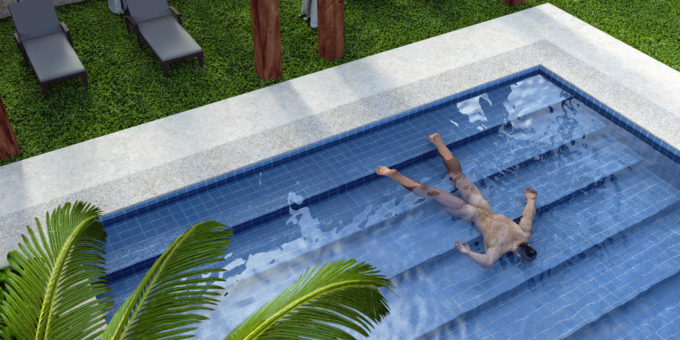 Back in the 1950’s crime fiction was published in hardcover with an illustrated dust jacket. Crime fiction books were an expensive item aimed at a particular market. Detective stories by comparison could be published as inexpensive magazines with lurid covers. There were very few suburban libraries. The shopping center I visited included a store which rented out books. The store displayed the book dust jackets in the window. I took my border collie dog for an evening walk and routinely checked out the book dust jackets. The shop was closed so I was unable to inspect the book. I gaped at one title in bewilderment.

The jacket had a painted illustration which required considerable skill drawing three male torsos. The purpose of a book dust jacket is to attract readers; it attracted my imagination. The illustration itself doesn’t have to be literally accurate with respect to the details of the story.

The cover subject was unexpected and immediately arousing. Three men were naked. This was a rare treat. Censorship within the community filtered out most naked men. In this case the artist had drawn the naked backs, and broad shoulders of the three men; plump buttocks appeared on two men. Naturally, I wanted to see their cocks, balls and chest in all their mystery. Whenever I visited my local swimming pool, I pretended to be coy. Then, I could quietly check up on male swimmers in the pool, sunbathers and– best of all– fully naked swimmers in the showers and changing rooms. In the 1950’s artists were wary of showing full frontal nakedness. Physical torsos were drawn on a scale quite distinct from the bodybuilders of today. Men looked different. Post-World War 2 food rations combined with little exercise established a lifestyle. The swimming pool setting of the crime book captured my attention. I longed to join naked men in an imaginary private swimming pool. What was in the text of the book? Where did the drowning of one man fit into the plot? Was the swimming pool just an exotic locale for a crime? Was the crime one of many? Or did the hit men, members of crime syndicates etc. enjoy swimming?

The compelling image was unusual for a book dust jacket. Many years later I learnt that there were segregated swimming pools where men swum naked in the 1930’s. It was considered routine behavior at the time. This is one of those “facts” which get mislaid over time and reinterpreted by a new generation. The book dust jacket illustration shows a swimming pool of unknown depth; a naked man’s head is still swallowing water in the center of the pool; there are ripples outlining the water sucking into his mouth; his arms are beside his body rather than grasping up; his shoulders are broad; the back of the neck is exposed with no obvious choke marks. On the edge of the pool a naked man is climbing up steps with a double steel railing; water is draining off his body; he is facing another naked companion who is walking away. The eventual discovery of the drowning man’s body is of no concern to the two hit men. The two hitmen have broad shoulders, thick arms and generous buttocks. The artist has made no suggestion that any of the three men have hairy backs. In truth the artist would find it easier to paint smooth torsos.

Speculation on the drowning in progress is absorbing. The artist highlights the ripples emerging as the water gushes into the victim’s mouth. The rest of the swimmer’s head is above the water line. At this point a trained pool attendant could rescue and resuscitate the swimmer. The hitmen have assessed that a rescue is unlikely before the victim completely drowns. It’s interesting to note that the hitmen are confident of the result and do not wish to see the victim gasp his last breath.

How did the hitmen entice the victim into the pool? Were they just going for a swim? Or was it a formal crime syndicate execution? Did anybody issue an order for an execution? Crime syndicates are renowned for extreme macho attitudes. It would be perverted for male members of a crime syndicate to be physically naked and without the benefit of concealed weapons. The two hitmen had the confidence and physical strength to execute the selected swimmer.

What did they do in the water? According to the artist the victim was in the center of the pool. Would there be obvious physical signs around the neck after they choked the victim? Were they unconcerned about leaving bruises and marks on the body? The hitmen must have ducked the victim underwater. Did the hitmen mount a coordinated attack: one dived under and assaulted the victim from the deep whilst the other concentrated on the victim’s neck? Did they just grip the victim?

Was the attack a surprise or a predicted execution? The victim may have been resigned to his fate because he broke a crime syndicate’s rules. Was he also a hitman who had stuffed up on a job? Execution for stuffing up a job may be the understood penalty. In the unlikely event that the victim was the fall guy one would expect a struggle for life. Did he cry out for help? Did he hold up both his arms out of the water and struggle for air? It’s a pity the artist was unable to show the face of the hitman climbing the swimming pool steps. The artist portrays a hitman confidently raising himself out of the water. I want to know whether the hitman is smiling because of his kill and how erect is his cock? A big question: Was there a sexual element? Were all three cocks aroused by the execution?

If I were to rewrite the text: the swimming pool execution would be a satisfying experience for all three naked hitmen. Two hitmen would combine forces to duck, choke and drown the third hitman. The victim would attempt to crush the balls of the two hitmen underwater; indeed he would give them the joy of extreme pain They reciprocate by pushing their knees down on the victim’s broad shoulders. The victim’s head is completely pinned down to respond to their ducking–down into the water, out to expel air, down before the victim can catch a fresh breath. They feel their erect cocks bouncing off the broad shoulders, their balls straighten up after the intense pain. They would like to crush his balls too but they have to concentrate on his drowning. Until this moment they hadn’t noticed the size of the victim’s chest.

The victim has opened his mouth wide open to swallow the water to fill his large chest. This is a sensible move to bring his own execution to a conclusion. The two hitmen leave the pool exultant at their hit. Their cocks are frisky and primed for the next execution.

You are invited to be a guest blogger on this site. Learn how.